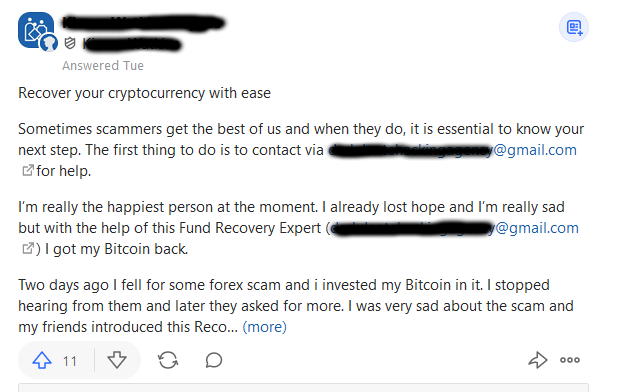 A BBC article reports that white hat hackers helped a Bitcoin early adopter access her locked wallet. Although the story ended on a happy note, others in a similar situation could be prompted to follow suit, potentially leaving themselves exposed.

The efficacy of wallet recovery services is debatable. And, as mentioned, this sector is filled with shady characters whose pitch screams scam.

For example, a Quora question on Bitcoin recovery shows a glut of replies, each recommending an expert to help with the problem. Telltale signs include:

Talk of scammers and the suggestion the recovery expert is not one.
Contact via a Gmail address rather than a company domain name address.
The use of copywriting “power words” like ease and happy/happiest in a context that’s out of place with a genuine person telling their story.
A convoluted story of how the expert saved the day.

With the value of Bitcoin being so high, the temptation to reach out to “recovery experts” is somewhat understandable. But is doing so inviting trouble?

Rhonda Kampert of Illinois first invested in Bitcoin in 2013, buying six $BTC at the price of $80 per token.

Over time, she spent some of the tokens but largely forgot about her holdings, as many did during this run-in period. It wasn’t until 2017 when Bitcoin hit $20,000, she suddenly remembered.

In the excitement of the situation, she hurried to her computer to open her wallet, only to discover her wallet ID was incomplete. While she had carefully written down her password, it was the partial blockchain “username” that had defeated her.

“I realized then that my printout had missed some digits on the end of my wallet identifier. I had a piece of paper with my password but no idea what my wallet ID was.”

In her search for help, she stumbled across a father-son duo called Chris and Charlie Brooks. After “talking to the guys” for some time, she felt confident enough to hand over what details she did have.

During a video call between the two parties, Kampert recalled how Chris opened her wallet live in front of her. Of the original six $BTC she had, the wallet showed a balance of three and a half ($175,000 at that time, but less at today’s price, coming in at $153,000).

After paying Brooks their 20% fee, she paid $10,000 towards her daughter’s college studies. The rest has been transferred to a hardware wallet, with the PIN “etched in her memory.”

The BBC article did not mention how the Brooks managed to access the wallet. But, given that Kampert had the wallet password, it’s assumed that the Brooks brute-forced the wallet by trying every possible combination of the missing digits in the wallet ID.

Although technically hacking, it’s important to note that there is no consistent method to hack a crypto wallet.

While things worked out well for Kampert, she risked losing it all on trusting the Brooks. How many have done something similar only to be scammed?

Kampert’s story highlights the importance of taking extra care at the setup stage and having fail-safes in place just in case. While that might be a pain for some, losing a fortune is more distressing.

The post Is it safe to contact white hat hackers to restore your lost Bitcoin? appeared first on CryptoSlate.

How To Add Bitcoin To The Balance Sheet For Corporations, With Saylor & Dorsey new crypto currency