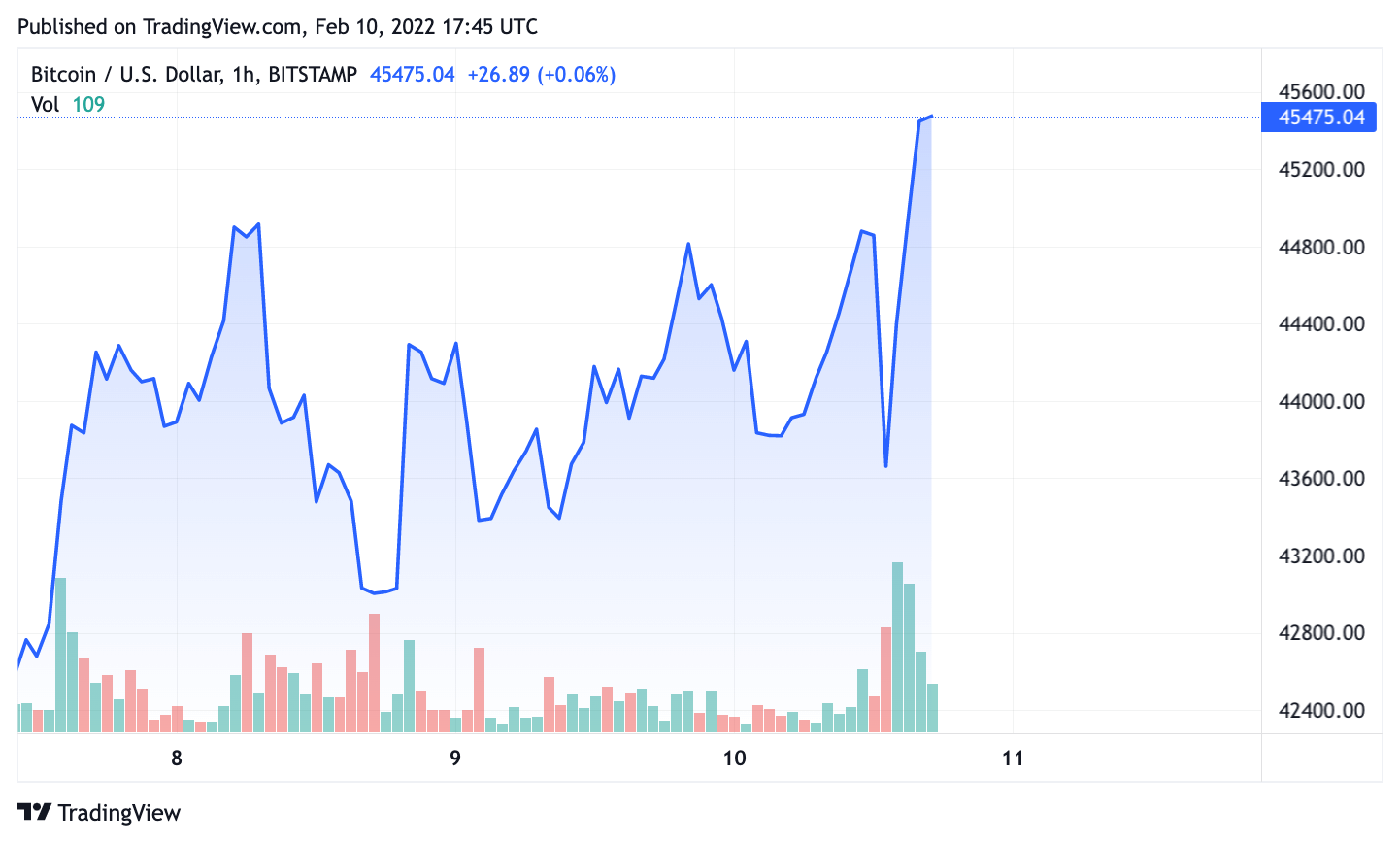 After beginning the year above $47K, the price of Bitcoin lost more than a quarter of its value as January unraveled, and the cryptocurrency revisited the $33K territory.

During the past week, Bitcoin pumped 22% and managed to break the psychological level– trading north of $45K at the time of writing.

Bitcoin tested the psychological level earlier this week–on February 8. After the correction, it found strong support at $43K–successfully breaking the downtrend, and climbing above $44,800 yesterday.

According to the data from Into the Block, with the price surpassing the $45K mark, the percentage of addresses holding Bitcoin and profiting just recorded a multi-month high–67.32% to be exact.

The % of addresses profiting in $BTC just recorded a multi-month high.

As the price of #Bitcoin pushes above $45,000, the GIOM indicator reveals that now 67.32% of the addresses holding BTC are profiting from their positions.

This is the highest % since December 29th of 2021. pic.twitter.com/Pm6HwFSqEx

Global in/out of the money, or GIOM indicator, is an on-chain metric that shows how many addresses hold the asset– revealing in which proportion, and are they in profit or loss depending on the purchase price vs current price.

“Mega” whales persistently buying BTC since the end of 2021

Meanwhile, Bitcoin flows suggest that long-term holders, especially those with the biggest bags, remained unfazed by January’s market downturn–continuing to add to their positions.

According to crypto analytics firm Santiment, “mega” whales have been persistently buying Bitcoin since the end of 2021–and as a group accumulated 220,000 Bitcoin.

Mega whales of #Bitcoin have accumulated significantly the past 7 weeks. Addresses with 1,000 $BTC or more have added a combined 220,000 $BTC to their combined wallets since December 23rd, the most rapid accumulation we’ve seen since September, 2019. https://t.co/RdVAg9FcP7 pic.twitter.com/gL1nJ18hyA

This means that addresses holding 1,000 or more Bitcoin have added more than 1% of the cryptocurrency’s total supply during the seven weeks since December 23.

According to Santiment, this counts as the largest mega whale Bitcoin accumulation since September 2019.

The crypto analytics firm also noted that during the past week, Bitcoin’s trader sentiment has “turned strongly positive,” noting such euphoria could indicate the market could be due for a correction. How to Buy Enjin Coin | Where, How, Why new crypto currency