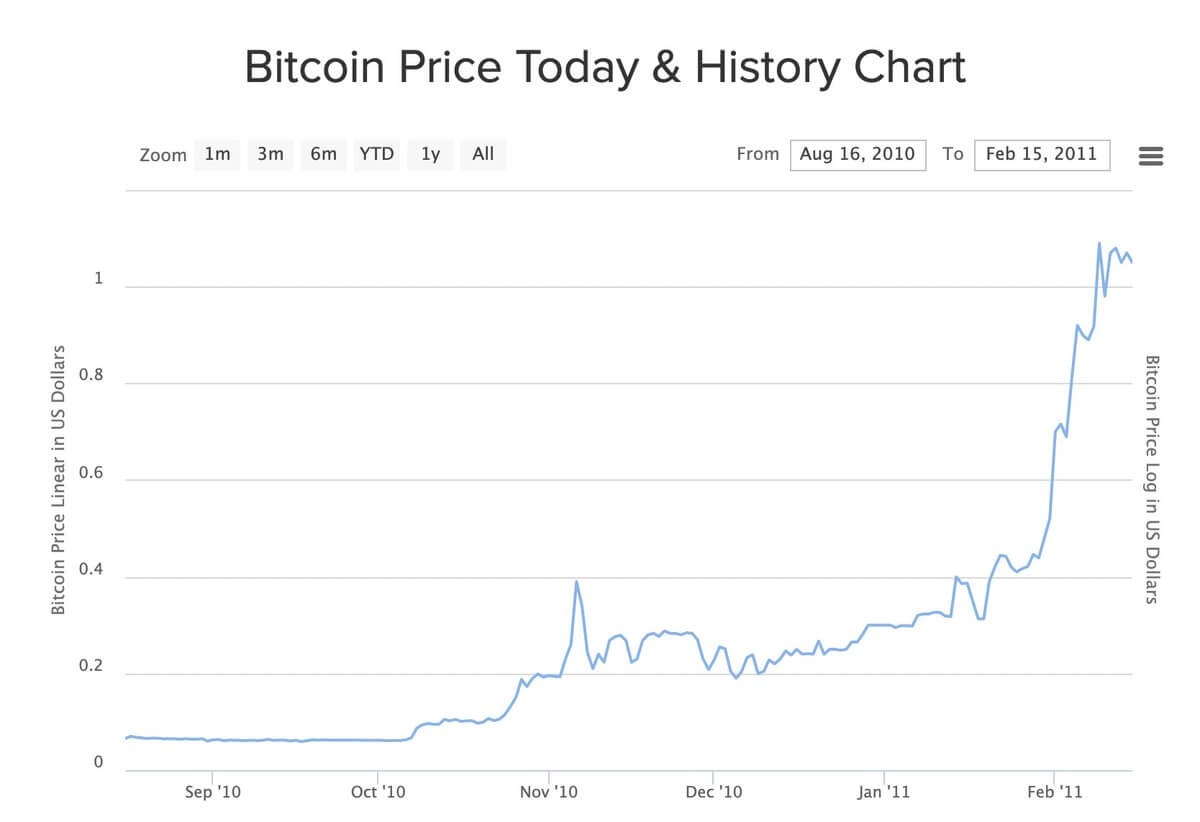 On the 9th of February 2nd, 2011, eleven years ago today, the price of bitcoin (BTC) reached a market value of exactly $1, a little over two years after the first Bitcoin blockchain block was created in early 2009.

In the very early years, there were only two ways to obtain bitcoin — by mining it yourself or arranging a peer-to-peer trade via a forum like Bitcointalk, which Bitcoin creator Satoshi Nakamoto founded to host Bitcoin-related discussions.

Back in those days, peer-to-peer trades were risky given they required trust between the transacting parties, but the stakes were not as high as they are today because each bitcoin was worth virtually nothing. The first bitcoins were transacted for zero dollars and reached an early peak in 2010 at 39 cents.

By 2010, interest in Bitcoin had grown and new methods for obtaining it emerged. Bitcoin core developer Gavin Andresen created a bitcoin “faucet,” a website that would give anyone with a Bitcoin address five bitcoin for free. It was at this time that the first bitcoin exchanges emerged.

The first “real” bitcoin exchange, Bitcoin Market, was announced on the Bitcointalk forum in 2010 and it launched the same year, offering a floating exchange rate for bitcoin. Before this, there was no bitcoin market to speak of, and thus no way of establishing a floating market valuation of the bitcoin currency. Buyers could purchase bitcoin by sending another user U.S. dollars via PayPal while Bitcoin Market would hold the seller’s bitcoin in escrow until the seller received their money.

The most notable exchange to emerge in 2010 was the now infamous Mt. Gox. The Japan-based exchange was hacked in 2014 with a devastating effect on many users, and the exchange went bankrupt not long after.

Tradehill, another exchange, allowed users to purchase bitcoin “instantly” instead of submitting limit orders on their exchange. Tradehill enabled users to deposit funds via wire transfers and various payment processors.

After reaching $1, the price of bitcoin increased rapidly over the following three months, peaking at $29.6 on the 7th of June – a 2,960% gain. In what would turn out to be a familiar pattern till this day, a sharp recession in the market followed, and Bitcoin’s price bottomed out at $2.05 by mid-November 2011.

Those lucky, or stubborn, few who acquired bitcoin at $1, and managed to HODL on to it, have, of course, made a handsome profit since. It’s easy to multiply from $1 to any market price through the history of Bitcoin. The market price of bitcoin reached its thus far all-time-high on the 10th of November at just over $69,000. How to Buy Osmosis | Where, How and Why new crypto currency

More Than 750,000 MATIC Have Been Burned Since Launch of Burn Mechanism new crypto currency What Should We Expect From The Launch of The Bored Ape Yacht Club Tron? new crypto currency