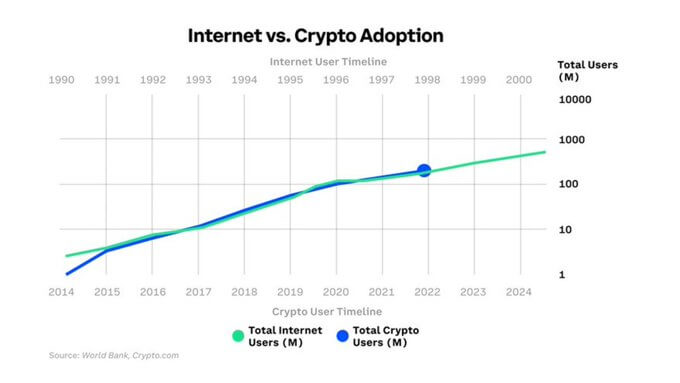 Crypto influencer Lark Davies tweeted a chart showing internet and crypto adoption rates. By superimposing the respective lines, taking account of when both started gaining traction, a close correlation is demonstrated between the two.

As crypto relies on the internet, it’s reasonable to assume a substantial degree of positive correlation. But, as Web3.0 begins to take off, how might the rate of crypto adoption change?

Crypto adoption mirrors that of the internet

Back in early 2020, on-chain analyst Willy Woo commented that crypto adoption is comparable to that of the internet. In that, things start off slowly, but over time, crypto adoption will explode.

Woo said mass crypto adoption isn’t here yet, nor do the masses see it happening because human perception tends to process information linearly.

“Human nature is one that looks at things in a linear stance. So we’re not very good at looking at exponential growth, which is obviously what bitcoin is doing.”

On the question of why mass crypto adoption isn’t here yet, Woo said asking that is the equivalent of an internet user in 1994 asking why no one uses the internet. In other words, adoption is happening right now.

Billed as the next evolution of the internet, Web3.0 has a lot to live up to. But, as a somewhat nebulous term, what exactly is it, and why does it matter in respect of cryptocurrency?

In a Medium post by VC firm Fabric Ventures, Web3.0 is described as the ability for users and machines to interact through peer-to-peer networks without the need for third parties.

“The result: a composable human-centric & privacy preserving computing fabric for the next wave of the web.”

The term peer-to-peer is a big hint in terms of how cryptocurrency and blockchain technology fit into the picture.

If Web3 takes off, the logical outcome is that the internet and blockchain will become fully integrated. Thus, boosting crypto adoption exponentially to levels beyond even Woo’s expectations.

NBA Champion Andre Iguodala Takes Part of His Salary in Bitcoin, Who Else? new crypto currency

Why not DeFi? Exploring the argument for liquidity staking new crypto currency